Back in May I published a guest post on co-writing by Kaisy Wilkerson-Mills, co-author of The Dystopian Nation of City-State. Today Kaisy is back with us for a QnA about indie publishing, the genre dystopia and more.

Tell us about The Dystopian Nation of City-State. 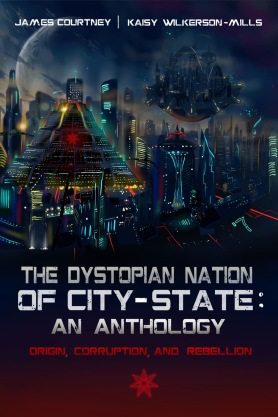 Kaisy: The Dystopian Nation of City-State is a futuristic nation set in the year 3211.  It is a horrible place where the government controls all aspects of its citizens lives.  From entertainment and sports to health care and education, the residents are forced to comply with unreasonable rules and procedures.  Unfortunately, the residents believe this is normal, and they do not fight the system.  And, well, there are the Illegals and a couple of doctors who attempt to debunk the system.

What do you think attracts the reader to dystopian literature?

Tell us about your writing process. Do you work to an outline or plot or do you prefer just see where an idea takes you?

Kaisy: James and I have a structured process.  We constantly talk and outline each chapter, section, or short story.  “Seeing where the idea takes us” usually happens in the outline/prewriting stage.

If you were to write in any other genre except dystopian/sci-fi/fantasy, what would it be?

Kaisy: Oh my!  I don’t know!  I think it is safe to say the James and I could attempt any genre EXCEPT romance.  No “crotch novels”, please.

Do you proofread/edit all your own books or do you get someone to do that for you?

Kaisy: James and I edit and proofread all of our writings.  I am an English teacher, so I can handle most of the grammar and style issues.  James is the lead creative force, and I fill in and proofread.  We make a great team!

Do you think that the book cover plays an important part in the buying process?

Kaisy: Oh yes!  Most readers “eat with their eyes”.  The cover and the title draw the readers to the literature.  It is just as important to create a intriguing title and cover as it is to create the story itself.

The indie author must also be a good salesman/woman. Your take?

Kaisy: Yes, indies need to be charismatic and bubbly, but the word “salesman” may be a little strong.  No one wants a pushy salesman.  If the author is excited about his or her literature and the story is great, readers will take note.

Tell us about something interesting/amusing that happened while promoting your book.

Kaisy: This actually happened the other weekend. I was at Crystal Coast Con promoting City-State’s short stories, and someone asked, “Cool star.  What does it mean?”

Ooops!  Well, the Seven Point Star is City-State’s national symbol, and I had forgotten that James perfectly laid out the Star.  James assigned a word/theme and an explanation for each point of the Star.  I couldn’t remember this information!  FAIL!

Kaisy: Don’t quit your day job, and BE PATIENT!  Novels and short stories are not written in a day.  Use and trust the writing process.

What lies ahead for Kaisy and James after the City-State Adventures?

Kaisy: James and I will be releasing our first novel, StarChild, chapter by chapter on our blog. You all will get to read StarChild as we create it!  There are three parts to StarChild, and James and I are planning a trilogy!

To know more about the Dystopian world and read the StarChild for free, follow The Dystopian Nation of City-State on WordPress. The City-State Adventures are available via Amazon.