Recently, I read an interesting post on examples of bad sentences in classic literature. The book in focus was Austen’s Pride and Prejudice. Though I do not agree entirely with the author’s views, I do believe that the article is a brave attempt in deconstructing the classics in today’s perspective, specifically, along the lines of ‘Show, not tell’.

I have no formal training in creative writing, but I am no stranger to ‘Show, not tell’. Once upon a time I was quite active at http://www.writing.com and have myself given that advice to many newbie authors. Often those stories were under a thousand words and would benefit greatly if showing elaborated the content.

As far as a novel is concerned, however, I believe that there must be a good mix of showing as well as telling. Too much showing will unnecessarily increase the length. To prove my point, I will quote a portion from the above-mentioned article:

The gentlemen pronounced him (Mr. Darcy) to be a fine figure of a man, the ladies declared he was much handsomer than Mr. Bingley, and he was looked at with great admiration for about half the evening, till his manners gave a disgust which turned the tide of his popularity; for he was discovered to be proud, to be above his company, and above being pleased; and not all his large estate in Derbyshire could then save him from having a most forbidding countenance, and being unworthy to be compared to his friend.

WHY IS THIS A BAD SENTENCE?

1.  Massive Run-on- Six independent clauses with two dependent clauses.  A decent writer could get at least three sentences out of that (my writing instructors would say).

2.  “…his manners gave a disgust…” –What did Mr. Darcy do?  Fart loudly?  Chew with his mouth open?  I want to know what Mr. Darcy did to offend everybody, especially if it involved farting loudly.

Let us focus on the second point. If we judge the author’s claims in context of the single sentence stated from the book, then the author is spot on in his analysis. If, however, we judge the sentence in context of the entire book, then the analysis will differ. Throughout a good portion of Pride and Prejudice we find ample examples which clearly expound Mr. Darcy’s airs that displease everyone. Can we not, then, forgive a little telling?

I have written a book of short stories and have somewhat grasped the extent to which showing can be applied. Many a time, while I was writing the stories in Bound by Life, I was so engrossed in showing the scenes that I lost interest in carrying the plot on. Too much showing tended to slow my writing.

If we are to write as well as the authors we admire, perhaps we need to pay less heed to what the rule book of modern fiction-writing states. As beginners, these rules merely limit our writing ability to flow freely.

Have you ever struggled with ‘Show, not tell’? If yes, how did you overcome it? Don’t forget to share your thoughts with me through the comments below. 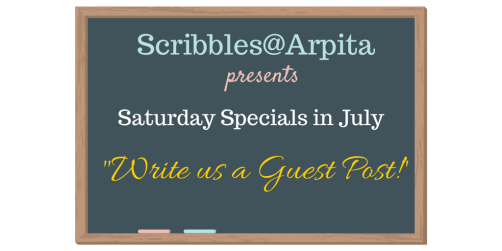 For Saturday Specials in July, I am looking for your thoughts on classic literature. Last week we had Mr. Gangopadhyay share his thoughts on the classic American novella, The Old Man and the Sea. This Saturday Belinda will share her review of To Kill a Mockingbird (instead of Madame Bovary, as mentioned last week). If you want your review of a classic novel featured on Scribbles@Arpita, contact me with your name, email, website and the name of the book you wish to review using the form given below. Only two more spots are left, so hurry!